Posts from the ‘Bikes’ Category

water in the desert 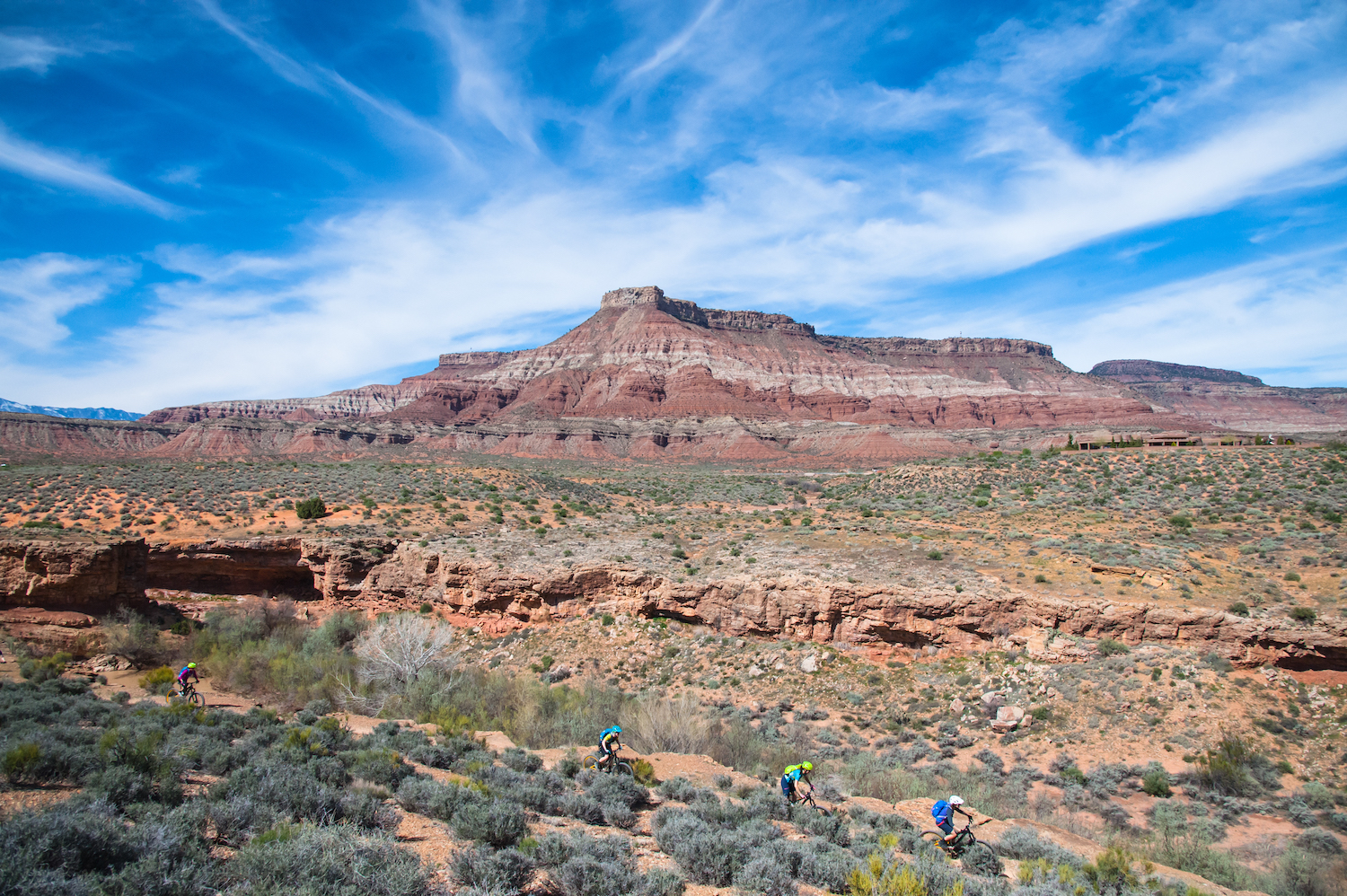 A few years ago now, my friend Joe Parkin guest-edited Dirt Rag magazine, and he asked me to write a story for it. With Dirt Rag sadly gone and the story likely to disappear into my magazine pile forever before long, I decided to put it here for safekeeping.

This is a story about bikes and friends and recalcitrant trails, and the ways that our worlds collide in ways we never quite expect.

I have included Joe P’s original introduction, because it made me laugh at the time, and it still does. I reproduced this thing from my original file, so any errors belong to me. Don’t blame Joe. He’s totally innocent. The Oxford commas, for example, all mine.

My friend Jen See has a big brain—as in Ph.D. big. Despite that, she writes a lot of stuff about bikes. When she’s not writing about bike-related things, she surfs. A couple of years ago, she gave me a copy of Chas Smith’s Welcome to Paradise, Now Go to Hell, which is a totally awesome read, by the way. [Jen: Heh, that’s where my copy went!] Recently, she went on a media trip that included a trail that I don’t like at all. She didn’t either. Mostly. Though she ended up finding something positive. I asked her to write a piece that felt like Chas Smith [Like I could really ever ghostwrite Chas!] but was still completely Jen See [That part, I can do, for better or worse]. I think she did it. —Joe Parkin

We’d driven out to the desert with mountain bikes and beers, the necessary ingredients for a weekend of trouble making. Up a muddy road, the campsite sat high on a mesa overlooking the torrid landscape of southern Utah. We pitched tents and pulled cactus thorns from our fingers. Clouds billowed overhead, promising a future storm. I didn’t like the look of that, but there wasn’t much I could do about it. Sometimes I regret my life choices.

END_OF_DOCUMENT_TOKEN_TO_BE_REPLACED

A deep cut for my cycling friends, this essay reviews Italian playwright Dino Buzzati’s account of the 1949 Giro d’Italia. It originally appeared as a front of the book piece in Paved Magazine, and it fit the offbeat vibe of the place. If you can by chance find a copy of Buzzati’s book, I highly recommend it. A lengthy review essay like this one is so thoroughly a print artefact, it feels out of place here on the internet. But why the hell not? Words, we can put them anywhere we want, really. Also, history is fun. Let’s make more of it.

In 1949, Corriere della Sera sent Dino Buzzati to write about the Giro d’Italia. His daily reports are collected and translated in The Giro D’Italia: Coppi versus Bartali at the 1919 Tour of Italy. A novelist and playwright, Buzzati had never before followed the race. The editors plainly gave him a free hand, because Buzzati did not cover cycling in any normal sense of the word. Read Buzzati’s dispatches in vain for talk of time gaps and race leaders. The stage winner is rarely the lede: This is no straight-up story about a bike race.

Instead, Buzzati’s daily reports read as a series of dreamy, stream of consciousness essays. He is the master of overwriting with a style so wrong, it’s eventually beautifully right. And through the surface chaos, a consistent set of themes become clear over the course of his twenty dispatches from the Giro. Buzzati meditates on what it means to be Italian at that particular moment in history. He dreams in classical mythology and finds ghosts among the ruins. A bike race runs through it all.

Buzzati’s cycling vacation came at the height of one of the sport’s great rivalries. In 1949 Fausto Coppi had twice won the Giro d’Italia while Gino Bartali had three victories in Italy’s grand tour. Legend has portrayed the two riders as stark opposites, a perspective reinforced by the dramatic race reports of the time. Like a photographer peering through a pinhole, cycling’s writers of the 1940s could see only pieces of the whole, so they filled in the gaps with their own inventions.

END_OF_DOCUMENT_TOKEN_TO_BE_REPLACED

This story originally ran at The Toast about four years ago. A slightly different version ran in Adventure Journal Quarterly. What I love about it now, actually, is that some of the commentary about culture and gender seem almost out of date. Like ideas about women and sports and what we can and can’t do, that terrain is shifting fast. So I guess what I’m saying is maybe there’s a glimmer of hope in these things. Either way, I still like this story. It has a lot of bikes in it. And bikes are good.

I’m working in my kit again. I thought I could escape, but then the phone started nagging. So I sat down to answer it and to answer that other thing, and to edit that one thing and to make that other thing. Sitting still is hard. I just want to go ride. The internet is such a dick sometimes.

So here I sit, my padded shorts feeling like diapers in my cushioned office chair. On the bike, I don’t notice the padding. Off the bike, it shifts and bunches like an over-sized maxi-pad. Finally, I pull up the straps on my bibshorts and zip my jersey.

If you’ve never seen bibshorts, they look like shorts with suspenders attached. Before the time of lycra, cyclists wore wool shorts with actual suspenders. These days bibshorts are a weird, one-piece contraption, the parts sewn together painstakingly by women in a factory somewhere in Romania. The sewing process is not easy. The lycra is pieced together and the seams placed just so. No one wants a seam in the vagina.

I’m a Title IX girl. I swam in college, my team funded because the law required it. Eventually I got bored of chasing the pool’s black line and turned mountain bike racer. My friends and I used to say that women’s participation in sports was one of the last battlegrounds of feminism. We were more optimistic about feminism then, and in truth, about life.

The wheels thunk as I ride down the stairs to the sidewalk and shoot through the grass to the street. The bike doesn’t really stop. Somewhere between the emails and interview transcripts and editing corrections and can you just do this one thing, I need to adjust the brakes, but I haven’t gotten around to it. It adds excitement to the whole thing to ride a bike that doesn’t really stop. You just go faster.

END_OF_DOCUMENT_TOKEN_TO_BE_REPLACED

Bikes and public lands go together like chocolate and peanut butter. Or, well, anything else you can think of that go together well. Pretty much all the riding you do is on public land, so government decisions about things like national monuments, road maintenance, bike paths — all the things, really — matter for cycling. I wrote about what reducing the size of Bears Ears and Grand Staircase-Escalante means for cyclists. Read more at Bicycling.

Cycling’s biggest race, the Tour de France, runs three weeks every July. Each year, the race organizers strive to create an innovative and suspenseful course. The much-anticipated announcement of the 2018 route took place earlier this week in Paris. Though it’s still months away, this year’s Tour offers some unique challenges that could shake four-time champion Chris Froome and his dominant Team Sky. Here are nine things you should know about the new route. — Read more at Men’s Journal.