My mom said I needed to blog more. I always do what my mom says. Um, well, most of the time. Well, okay, some of the time. Not very often?

Well, anyway, here I am, and I’m going to blog now.

New Look. The Lint Trap now has RSS feeds. And a real blog roll with updates and excerpts. Crazy stuff. I know, I know, welcome to two years ago. Laggage. It’s what I do best of all things.

This New Look should not be confused with Eisenhower’s New Look, which is a different thing altogether, involving large quantities of nuclear weapons and alliances with countries whose names you can’t pronounce. Do make a note of it.

Restoration. The VeeDub, which is older than I am, just got new floor boards. Because the old ones, they were rusting. If you looked real closelike, you could see the road pass beneath the car. I mean, I’m all about energy conservation and stuff, but going the Flintstones route seemed a step too far. Voilà, new floorboards, no more holes. 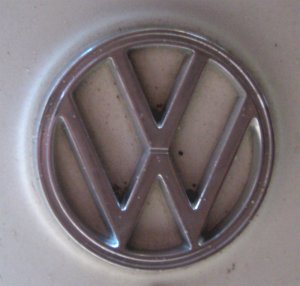 While we were crawling around under there — or, more accurately, while our crazy German mechanic was crawling around under there — we also put new shocks in the front end. The old ones were very old. Like, original, just rolled out of the factory, never replaced old. Now, the car’s all springy like. Boing. The rear shocks are still original, because they still work. Brilliant.

Last fall, the VeeDub got a brand spanking new transmission. Now, all it needs is a paint job. That’ll have to wait for Spring, because we wouldn’t want to miss any of the winter swells and stuff. We recently put old-skool roof racks on. Yes, it needs a picture. Forthcoming. Now, we look suitably retro when we roll up to the local spot. Except for the shortboards, that is. Ah, well, consistency makes for small minds anyway. At least, that’s what Emerson always said, and who am I to doubt him?

You want to know my very favoritist thing about driving the VeeDub around? We get to hear everyone’s stories. People stop by, they want to tell about the time they drove their brothers ’66 to Baja or how they used to have a blue one, back in the day, how sweet that car was. Always the stories.

We laden onze woody. Speaking of winter swell, apparently it’s time for them to show up. And apparently, it’s time for like a gazillion people to show up to surf them. Who knew so many people owned surfboards?

I so heart me some Dutch.

Now, Doods, the first head-high swell of the winter is not the day to bring your girlfriend for her first ever day of surfing. It’s not going to be fun. For her. Or for us. If you insist on bringing her, do please give her a few tips. Like, for example, letting go of your ten foot longboard in the line-up is not nice. Sitting like a buoy in the impact zone, while the rest of us dodge and weave around her, is not so nice either. Just trying to help out.

And Girls, please try to remember, bend at the knees, not at the waist. If you can’t remember this very simple lesson, we recommend board shorts. Do your really want your ass sticking up in the air like that? No, I didn’t think so. Fortunately, it will soon be too cold – really, it was never warm enough – for such transgressions. Phew.

Bike rides are fun. Fall has to be one of my favorite times of the year for bike rides. I love the dry, desert heat of the Fall, the weird winds that whorl up through the canyons, the clear air. Lovely, really.

your girlfriend left you, your wife is ugly, your wife is beautiful, but sleeping with someone else, your job sucks, you got fired from your job, which still sucks, you’re late for a meeting, you’re late to sleep with someone else’s beautiful wife, your kid’s a fucking twit, your kid beat up a the neighbor’s fucking twit and now there’s hell to pay, you’re late to the twit’s soccer game, you’re pissed because you had to work during the swell last week, you took off work, but there was no swell, you hate bikes, you love bikes, but you’re still late, you’re late for class, the dog ate your homework, you failed the exam, because you didn’t study, you studied for the exam, but you still failed, fucking professors anyway, your girlfriend’s cat threw up on your shoes, gas costs too much, your car isn’t as cool as your neighbor’s car, your boyfriend’s sleeping with your neighbor, because her car is cooler, or your stock portfolio just took a beating…

Don’t take your fucking problems out on me. I’m just riding my bike. Thank you.

Anyway, it’s fun going for bike rides in the Fall.

Pro Cycling Shenanigans. The bike racing news lately, it just gets weirder and weirder, doesn’t it?

Lance Armstrong, again? Where’s my DeLorean, I need to get back to the future.

And this week’s scandals and speculations. Could they just get it over with already? The suspense is so totally killing me right now. Eh, I’ve written my share and then some about that elsewhere. I wouldn’t want to be redundant or something.

But Lombardia is coming soon, which is one of my favorite races of the year. They do know how to throw them some bike races there in Italy. Could Worlds have been any more fun? Well, yes, if I’d actually been there. But we endure.

And that just about exhausts my blogability for this Wednesday afternoon. The word supply is running low, the gauge says E.

So I stop now.