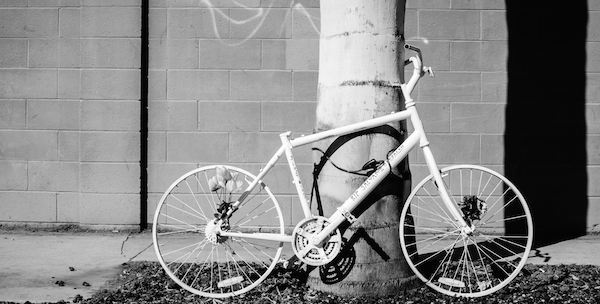 The ghostbike dedicated to Salvador Barragan leans locked to a palm tree in Oxnard, California. Unbroken lines of cars stream down the four-lane road past the stripped-down, white-painted bike. A faded tag on the wall recalls a turf war, likely long forgotten by now. The wall, built of pale pink cinder blocks, is a typical sight in California, dividing backyards from roadways, preserving the illusion of tranquility against the rush of suburban life. Barragan died after he was hit by a driver making a u-turn.

Ghostbikes are fleeting, ephemeral memorials to cyclists killed by cars while riding their bikes. The bikes, their parts removed, are painted white and placed on the roadside. Most ghostbikes are removed very soon after they’re placed. Maybe it’s easier that way. On rare occasions, a ghostbike may stand for many months, a stark reminder of a last ride and a life cut short.

A while back, I did a photo essay for Bicycling on ghostbikes and it’s now live. The first ghostbikes were placed in St. Louis, Missouri in 2003 and they’ve since become a near-universal symbol for a downed cyclist. I interviewed a pair of activists in Southern California and photographed a series of memorials for the project. Head to Bicycling.com to see the story.

Of course, there were way more photos than we eventually ran, because that’s how it always works out. If you’d like to see the rest of the images, I put a ghostbikes gallery over on my photo site.