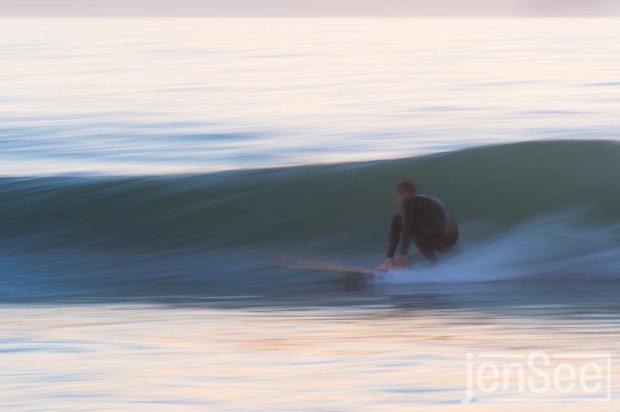 The whole problem was that pine doesn’t float.

He’d gone to the hardware store and bought the wood, three six-food long boards. It was pine, because pine is what they sell at the hardware store down the street. Then he’d brought home the boards and glued them together, each six inches wide and one inch thick, and clamped them tightly. The glue seeped through the cracks and pooled on the cement. When the glue dried, he cut the whole thing loose from the patio with a saw.

Then he took the saw and made a few cuts and took the hand planer, and well, then he planed. That took a while, since it was a very small planer, barely big enough to fit in the palm of his hand. Soon a pile of shavings the color of a well-brewed pilsner or of the late summer hills of central California grew at his feet. Then the sand paper, creased and dusted, scritched and scratched at the boards, smoothing out every last rough spot and rounding off the edges and corners. Finally he painted on two coats of oil to seal the wood and at last it was finished, a freshly made wooden surfboard, ready for its first trip to the sea.

Except that it didn’t float. Or at least, not very well. Surfboards come in all shapes and sizes and colors, but the one trait they all share is that they float when put in water. This is in fact essential to their purpose. They must float and ideally, glide across the surface of the water. Speed is also a good attribute for a surfboard to have. But the pine board with its glue and its planed edges and sanded curves didn’t float or glide or do much of anything very well. It wasn’t meant for water, it seemed, which was a terribly sorry thing, because a surfboard is by definition meant for water.

And so he decided to try again. This time instead of pine he ordered special wood, wood that would float. It traveled across the Pacific on a container ship of the sort whose discarded containers are smashed together and turned into trendy bars and art galleries where men with beards like to gather. The special floating wood showed up on the doorstep, delivered by a harried FedEx driver around 10am one morning.

There were three boards in the package, each one over six feet long, cut from a Paulownia tree somewhere in Asia. Paulownia trees are magical things. Their wood floats, yes. And the trees regrow from their roots even after they’ve been cut down for boards to send across the ocean. Paulownia is for boats and surfboards, for all the things that need to glide on the water.

This time instead of planing the boards himself with his tiny palm-sized planer, he took the boards to a wood-worker named John who has a shop full of tools and a truck to haul them. His workshop is on a hillside, deep in a hidden canyon, the kind of place you don’t know exists until you do. The canyon runs west to the ocean, west toward the channel islands, blue and sharp-edged under a noon-day sun.

John glued the three magic boards together and clamped them tightly. Then he took his planer and smoothed and shaped the wood to his whim. Then he sanded it to satin. Two coats of oil slushed over the wood to protect it from harm. And then it was done.

And this time when he put it in the water, it actually stayed on top of the water like a surfboard is supposed to do, not like the pine, which didn’t float at all. The board made from the magic floating wood that came across the Pacific in a container on a giant ship slid and sliced, twisting and gliding over the top of water glittering with light. And he rode it over and over, wave after wave, joyful.

But the magic wood that floats also breaks with impressive ease. And one day the surfboard made from Paulownia broke in half. It split right down the middle. He picked up the pieces and carried them home under his arm just like a normal surfboard that hadn’t broken in half. Then he went to the hardware store and bought some more glue, the waterproof kind, designed for boats and other things that go in the water.

And then he headed down to the beach, his wood board tucked under his arm, and paddled out into the capacious sea.

Tags: about a dude, alaia, beaches, california, magic, surf, surfing, waves, we call him splinters, wooden surfboard
From: Surf
← bike stories
in the clouds →
One Comment